Like Aesop, I admire the tortoise type. Set a goal, slow and steady, finish what you start. These are the people that tend to “make it” in any given field, because if you just keep going you’ll eventually have to get somewhere, even if it isn’t exactly where you wanted to go when you started. Dedication, attention to detail, and patience: people with these qualities get shit done.

I’m not really that kind of person.

My patience is forced. I will listen to your long and wandering story, but only because I don’t want to seem like an obvious asshole. I don’t swerve in and out on the freeway trying to game the traffic, but only because I’m already pretty convinced I’ll die in a car accident. The only reason I pay attention to details is because I hate wasting the time it takes to go back and redo things.

I have a functional kind of patience, but it’s not something I’d call a strength. 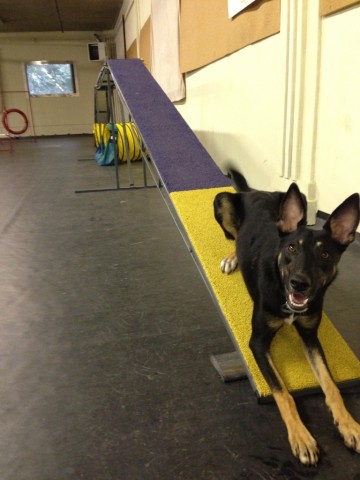 This is Vesper. In this photograph she is one year old and has just learned to hold a two-on-two-off contact on an obstacle called the dogwalk or plank. She is doing this because she is an agility dog, or will become one shortly.

Dog agility is a sport built around speed, accuracy and teamwork. A handler (me) navigates a dog (her) around a series of physical obstacles. When done well it is impressive enough that even a normal person (the kind that might very reasonably raise an eyebrow at the previous sentences–or paragraphs) can kind of get why you’d want to do that. When done poorly it is a thing singularly well-built for disaster. It is a disaster showcase. So much can go wrong.

From what I can tell, most people want a dog for companionship. I find this boring. When I wanted companionship I got cats, and when I wanted more of it I got married. What I want from a dog is the unique high of cross-species communication. Agility tests this kind of communication in a most extreme way. Try telling your dog to turn left when she’s twenty feet in front of you, high out of her mind on adrenaline and running as fast as she can. See how much practice that takes.

I knew that this was what I wanted a dog for, and so I looked for a dog that would be good at it. You need an animal who’s smart enough to pick up complex behaviors quickly, with strong problem-solving abilities. Most important is an extremely high work drive, meaning they want to do a job–any job–all their waking hours. These things mean you have a committed, fast, thinking partner on the course. It also means you have an absolutely godawful pet.

Vesper at nine months was extremely reactive. If there was another dog in the street, she would perform leash-lunge backflips until it was out of sight again. People were almost as exciting. Children put her in a thrall–as did birds, squirrels, neighborhood cats and any kind of ball. Walking her was a miserable chore that left the person sore and angry and the dog frustrated and not in the least bit tired. Her first puppy obedience class, she did so much shouting and leaping and over-enthusiastic dancing I worried we would get kicked out–especially since she was three times the size of any other dog in there. The instructor barricaded us behind visual barriers, and we began the longest, most demanding and complex behavior I will ever teach this dog: pay attention to me. I don’t care what’s going on out there. You need to pay attention to me.

The two of you begin with minuscule increments. You wait until the dog takes a breath between freak-outs and you click your clicker. (Presumably you have already taught your dog that click = what you just did is worth a cookie–a more detailed explanation here.) Probably your dog is too excited to eat the cookie; let it fall out of her mouth if that’s what she wants to do with it.

Probably you will have to repeat this a dozen times before the idea penetrates your dog’s over-aroused, excitement-fogged brain that when she is a tiny bit calmer, cookies start to appear. She will get a little tired from freaking out so hard, and will use this opportunity to mop up the abandoned cookies from the floor. They will taste amazing (they are nitrate- and gluten-free all-beef hotdogs, or maybe even steak, depending on how desperate things are at the moment). The next time she gets a click she will turn and look at you and as you feed her a nib of beef you will see the tiniest spark of recognition deep within the swiss cheese of her brain. This will be very exciting, because it is the beginning.

Do not think about how far you have to go right now. Trust that in nine months you’ll be able to unleash your dog in a public place, in a dirt arena steeped in years of strange-dog smells and full of complicated equipment, with horses and dogs and people wandering by, and you will be able to leave her in a sit-stay at the start line while you lead out two jumps so you can get a head start on her for the front cross before the fourth jump. Trust that she will be able to ignore her coach and the judge and ring stewards to follow you through the second front cross at the ninth jump, and that she will be able to focus enough despite the chemical high in her brain to hit the correct weave pole entry. Trust that when she becomes confused and overwhelmed and takes off for a lap around the ring on her own, you can call her back to you and she will run just as fast towards you as she did away.

But right now don’t get ahead of yourself. You will only get there by tiny increments, of half-seconds and dogs at the end of the block, endless laps walked and pounds and pounds of meat and cheese cut into quarter-inch cubes. You will get stuck and frustrated often. You will consider quitting when your dog begins to make a habit of abandoning you during practice to instead jump up and punch your teacher in the gut. You will want to throw her in the yard or stuff her in her crate on the days when she seems suddenly deaf and “around” means “try every trick you know in short sequence instead of using your brain to remember that one word which you definitely know.” You will cry several times when you come home to find that she’s been creative while you were out, with found materials or made.

I’m not a patient person, by nature. But I may not have a choice but become one.